More often than not, fictional characters have a lot of impact in our lives. We look up to some, we cast aside some and some of them leave us in tough positions as to whether they are lovable or not. There have been debates about certain fictional characters and the debates will be there as long as the books keep taking the rounds. For instance, Snape-James debates. Oh! I witnessed ‘word’ wars in their names.

I relate, not to the heroes. I adore some of those supporting, special characters for their simplicity and straightforwardness. Here are four such fictional characters I adore. If you know them all, you’ll know the underlying connection between them too:

1. Luna Lovegood from Harry Potter – She is weird, she accepts that and doesn’t change herself to suit the rest. She knows that people make fun of her, play games with her (remember she was searching for her lost shoes and found them hanging from the ceiling?) and that does not disturb her in the least. She continues wearing her radish earrings, spectrespecs and she keeps talking of nargles and wrackspurts that make no sense to anyone else.

While the rest write her off as weird, she has the insight at times to solve certain mysteries that even Hermoine couldn’t solve. Yet, Luna talks of them as though they are the most obvious things that anyone could think of. One such instance is when she helps Harry find Ravenclaw’s Diadem.

There isn’t much that Luna says, but every word is filled with wisdom and every other unintelligible word portrays how it is okay to be yourself. I Love her!

2. Phoebe Buffay from FRIENDS – Not a book character as most of will know. Phoebe Buffay had her own beliefs and no matter how weird they were, she stuck to them. Like Luna Lovegood, even though she knew that people found her weird, she wasn’t bothered. She was very compassionate towards animals and refrained from using woollen clothes or  eating meat.

During one instance, during her pregnancy, when she had a craving for meat, she ensured that her share of animals were not killed by requesting Joey to refrain from eating meat during that period (He is too adorable to have helped her considering how much Joey loves food).

She believed in being herself. I adored both her moralistic and the effortlessly humorous side! 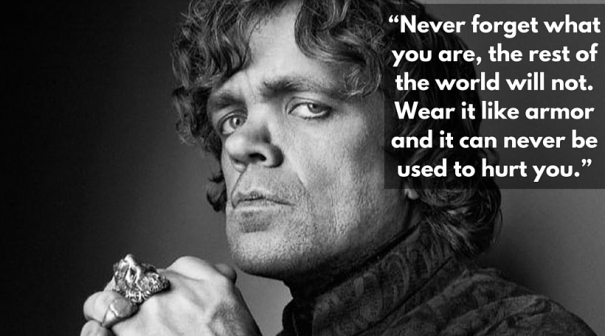 Tyrion not only knows his flaws, but also, he is aware of his strength. He is well read and cunning. His wit and knowledge are his sword and shield. Surely, we do see how he wages wars with words. That brain of his has helped him escape some tough spots more than once.

There aren’t many people who love Tyrion Lannister and yet, he fights. He lives among cunning lions, he knows he could be killed any moment, yet he is compassionate to the weak and righteous. The poison in the family doesn’t spread to him. Perhaps, it could be because he is the oppressed one in the family. Even so, he is one character that you cannot help but love.

Oh! And how could we miss those sarcastic one-liner jabs?

4. Ian from The Host – The Host is a book which has not reached many. You can read about it here and I am sure you will love it if you like fantasy, alien invasion & a bit of romance.

Ian is a young man who is one among the humans who are hiding from the aliens. When an alien walks into their midst, he hates her at first. But with time, he begins to understand her, empathises with her and gradually falls for her. The alien is nothing but a soul, and Ian isn’t bothered about her not having a body. He is in love with the soul alone and that speaks volumes about him.

The soul of the alien resides in the body of Melanie alongside her soul and Ian doesn’t care about Melanie’s form for it is only the alien part of her that he loves. The alien tells him that her soul is a ‘reflective silver living ribbon with nearly a thousand thin feathery attachments’ and yet, when he eventually holds the soul in his palm, he holds her with love.

He loved her personality rather than her form. 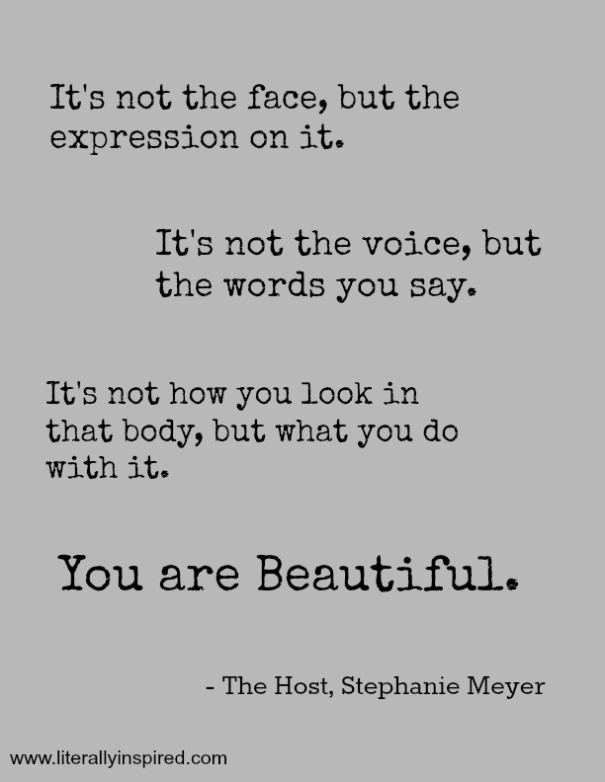 If you are the kind of book lover I mentioned earlier, please do read The Host. It takes a while for the plot to sink in. But after that, it is worth it.

This is Day 2 of Four Things Ten Days Challenge. If you like this, you can read the first day’s post here – Four Likes Four Dislikes.

PS – If any of you want to join the challenge, you can start right away. This is for 10 days and you’ll have only 4 things to list each day. I’m not revealing the remaining list now. You can discover it with each day. You can either join the challenge in your blog or in the comment section. 🙂

Warning: The first half is boring. But it is worth the wait since the later half compensates for it all.

I have never heard anyone say anything about this book. I don’t know anyone else who has read it. It might be due to the hatred for Twilight, that people completely avoided this book of Stephenie Meyer. But I would say that twilight and The Host are poles apart. This one is a fantasy too. But I felt it was more sensible. That explains the slow pace. Had the pace been faster, it would have made the story too unrealistic.

For those interested, HERE is the review I wrote about the book.

I wouldn’t say that the book is The Best. But it has been underrated for sure. If you like some wordplay and some deep feels and some romance, please do go for it. Above all, have some patience. 🙂

If any of you have read it or will be reading it, do let me know your comments about the book. I’d really love to listen to someone else’s point of view.

I haven’t read many books. Of the few I have read, I forgot half the stories. Some characters stay etched in your mind. These are the best I can think of. They are all hopeless romantics. Somehow I cannot think of putting any intellectuals in this category. As someone said, Love makes the world go round. Those who love truly are the bravest and smartest for they have found the essence of life. Here you go:

1. Gerry from PS I Love You – If a man could look so far into his love’s future, try his best to save his wife from the big blow, try so hard, too hard in such a short span of time, I would always want to know the things he would have done if he had been given more time.

If I had been in Holly’s place, those letters would have destroyed me. 🙂

2. Noah from The Notebook – Retelling their story every single day, dawn to dusk, to see his love’s face glisten with recognition for a minute or two. Willing to bear the searing pain every night when she forgets him again. Sometimes I wonder about the power of love, about the things that love can do.

3. Ian from The Host – He loves the soul. He loves the soul in that body. And when he gets hold of that soul, he looks at her with love. He is not revolted by the shape, the texture or the looks. He adores that soul. What more shall I say?

That is all for the day. My eyes welled up when I revisited the memory of Noah and Allie from The Notebook. I guess that would be one story that would tear me every time I think of it.

If you are a hopeless romantic, and haven’t read any of the above books, go run! Grab them and cry your eyes out. These are stories you must hear. 🙂

I could feel how intensely aware she was of the hand in mine. There was an emotion slowly building in her that I didn’t recognize. something on the edge of anger, with a hint of desire and a portion of despair.

‘Jealousy’ she enlightened me.

After long, really really long, I read. No! I drank with my heart and soul. Dived into the depths of a book so beautiful, meaningful, so true and touching. Every emotion carved into words so aptly that one may think the emotions were born after she wrote the words. If you get what I mean. You know! I’m no Stephenie Meyer! 😉

I’m a person who always adored everything unreal. Fictions were always my Favorite – Magic, witches & wizards, Vampires and now aliens! The Host is no exception. But what caught my attention is the reality that has been depicted in it.

Melanie – in whose body the alien dwells – doesn’t give up. She fights! For her little brother, Jamie and her love , Jared. She survives out of the power of her love and though she hates the soul that has conquered her, ultimately, they turn out to like each other. The occasional glimpse of her memories and dreams gets the alien falling in love with Melanie’s loved ones and together they set out in search of Jared and Jamie.

The alien falls in love with not just Jared and Jamie but with the humanity as a whole. It adores the Homo sapiens more than any other alien bodies it has conquered so far. It gets baffled by the varied human emotions, instincts, expressions, dilemma etc that it has never witnessed elsewhere.

Though their search yields fruit, they face many life threatening situations and as days pass by, the alien soul gets an admirer for herself – Ian. The boundless love between the human and the alien simply proves that love has  no boundaries.It realizes that it has to sacrifice it’s life for all the loved ones in this beautiful place called earth. For all the new friends made, for the new love found, for everything it never had till now, the price to be paid was self sacrifice.

I had lived in so many bodies, but never one I loved like this. Never one that I craved in this way. Of course, this would be the one I’d have to give up.

I have seen many paintings, read a few books and watched a number of movies. But came across nothing as real as this. I am a person who believes that no feelings can ever be put to words. Words may help you say what you feel. But never helps you say how much you feel. The intensity remains in your heart. Now, I must say that Stephenie Meyer has magic in her words. Though I still stick to my belief, I’m truly awed by the way she has expressed so many unspeakable feelings.

Later… Happy and sad, elated and miserable, secured and afraid, loved and  denied, patient and angry, peaceful and wild, complete and empty… all of it. I would feel everything.

Though the book is all about Melanie and the soul, I fell in love with Ian – the best guy ever!

The Host – The one among the best books I ever read. Thanks to Stephenie Meyer.